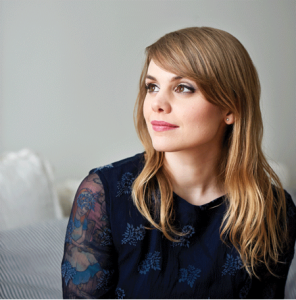 Béatrice Martin, whose ‘project’ Coeur de Pirate has become so successful that it is carrying her towards a new bilingual pop career, was born on 22 September 1989. She early on told interviewers how important her years from 18 to 25 were going to be, and that they would set her direction for the rest of her life. Now she has reached the horizon she set for herself. It is worth reviewing her exceptional career, and see where she may go next.

Filles Sourires has a particular interest in the blonde with tattooes from Montreal, for we spotted her right at the start, in Autumn 2008, before any other English-language blog, and before she was known in France. Béatrice was number 1 on the FS 2008 Year List :
‘And suddenly there she was, as could be expected from une fille fragile, whispers sweet words in your ear, and the songs will stay there, they won’t go away; they are forever, like a tattoo.’

Béatrice, who had started at the piano at the age of 3, launched her first album in Montreal as she reached 19, in September 2008, here with ‘Ensemble’

Right from the start this was something unusual – a girl at a piano with a backing band, with live performances as fine as her recordings. The video of ‘Comme des enfants’ soon followed and by January 2009 she was in France recording her music afresh. See her in the studio playing ‘C’est salement romantique’, one of her best early compositions.

Her international fame began though with the use of her track ‘Ensemble’ by a father in Quebec to go with as time-lapse film of his son playing on the floor over several hours – the famous ‘Vachon baby’ film which received publicity in the US and France. After this she was invited several times onto the CBC televised chat-show ‘Q’ at which she sang in French and talked in English. Here on ‘Q’ in September 2009 is the very first film of CdP performing her classic ‘Place de la République’, which she wrote after completing her original album, but did not record for another 2 years.

In 2010 Béatrice found herself conquering France, with sell-out concerts and at Les Victoires de la Musique. Scrutiny from amateur film-recorders became intense. Film of her on Youtube piled up. The video of ‘Pour un infidèle’ sung with French pop heart-throb Julien Doré was fun. Her first album by then was on the way to selling 500,000 and she had really arrived.

In 2010 the Quebec time-travel TV series ‘Les Rescapés’ (a reverse version of the British TV series ‘Life on Mars’) chose modern singers to perform hits from the 1960-64 period from which the characters had come, to be played over the end credits. Coeur de Pirate was chosen to sing best-known of all Francophone pop songs of that time, Françoise Hardy’s ‘Tous les garçons et les filles’.

Endlessly argued over for its comparison with the original, the film of this live performance has notched up 1.8 million hits on Youtube in 4 years.

Meanwhile CdP showed that she could better the originals with covers of well-known songs in English, as in 2010 with Phoenix’s ‘Lasso’.
This fine version is on no album yet. Also, check her duet with Jay Malinowski, on the EP they made together as Armistice.

The second album, the long-awaited ‘Blonde’, appeared in October 2011, and was immediately acclaimed as perfect. See the Filles Sourires full review here.
Béatrice then set out on a major tour with two albums to perform (and thus no longer a shortage of songs). Here she is at L’Ancienne Belgique on 4 December 2011.

And her first appearance in the United States followed, with four concerts – including a terrific one in New York in which she showed her bilingual skills in introducing every song… and the memorable line for monolingual Americans, ‘For those who don’t know me, I’m Coeur de Pirate, or Corda Pyrit…’ to huge laughter.

After her US concerts, Béatrice announced that she was pregnant and would not be able to complete her tour. But she continued well into the summer, perhaps the one top singer in the world who would do this. See her well-wrapped-up on a cold evening in April 2012 at the open-air Théâtre de Verdure in Nice performing ‘Les amours dévouées’ from ‘Blonde’.

A feature of CdP concerts is the scale of singing along with her songs. She has described in the past how her fans ‘know every word of all the songs’. Proof of this comes from this film of her final song, piano-only, ‘Adieu’, at Avignon in March 2012.

Béatrice’s baby, Romy, was born in September 2012, she having married Alex Peyrat in the summer. By the end of 2012 she was easing herself back into performances, including at a Montreal Christmas charity event a rather good version of Wham’s ‘Last Christmas’; and then back in France showing her dominance in duets such as with Roch Voisine here.

CdP’s more recent career, including her sell-out solo 12-concert tour in Europe in April 2013, and her 2014 album of English-language covers, ‘Trauma’, has been well-reported on Filles Sourires, here, her music for the ‘Child of Light’ video game here, and her interpretation of Renaud’s ‘Mistral gagnant’, where there is also discussion of her exceptional ‘Taratata’ appearance on 28 February 2014.

What can we look forward to? Film of her fascinating interview with Jian Ghomeshi on CBC’s ‘Q’ in March 2014 can now be watched.
Her skill and intelligence matched with frankness and humour is even more impressive than before.
Béatrice tells us how she works and that we can look forward next to a new album of her own songs – some in English. As she said to a music website Noisey on the release of ‘Child of Light’ in May 2014, “I always have music in my head from being in the conservatory early on and playing a lot of classical music. I have a lot of melodies that are just there and I record them all the time on my iPhone.”

But to really understand the Coeur de Pirate phenomenon, it seems right to mark her six years of success by showing her before her fans in several huge French concerts in 2010. She used to end her concerts performing ‘Francis’ solo at the piano, after the band had left the stage. Renaud Bastien, the senior musician in her band, filmed ‘Francis’ from the back of the stage several times. He put clips together in one 5-minute film. It’s worth watching.